The Amazon is the world’s largest tropical rainforest, covering over 5.5 million square kilometres. The Amazon Rainforest is found in South America (spanning across Brazil, Bolivia, Peru, Ecuador, Colombia, Venezuela, Guyana, Suriname and French Guiana) and produces more than 20% of the world’s oxygen.
According to the National Geographic, the Amazon has an incredibly rich ecosystem – there are around 40,000 plant species, 1,300 bird species, 3,000 types of fish, 430 mammals and a whopping 2.5 million different insects. At least 3,000 fruits and veggies can be found in rainforests with 80% of the developed world’s food originating in the tropical rainforest. Its bountiful gifts to the world include fruits like avocados, coconuts, figs, oranges, lemons, grapefruit, bananas, guavas, pineapples, mangos and tomatoes; vegetables including corn, potatoes, rice, winter squash and yams; spices like black pepper, cayenne, chocolate, cinnamon, cloves, ginger, sugar cane, turmeric, coffee and vanilla and nuts including Brazil nuts and cashews.
Each year, people burn rainforest to clear the land for farming and pasture, as well as illegal logging. The sad thing is that these practices make the forest even more vulnerable to future blazes and contribute to climate change. In Brazil alone, there are 80% more fires in 2019 than there were last year, according to the country's space research center. Based on statistics from the Global Fire Emissions Database, the number of fires in Brazilian Amazon states through August this year is 25% higher than the average number of fires in the same period from 2010-2018. 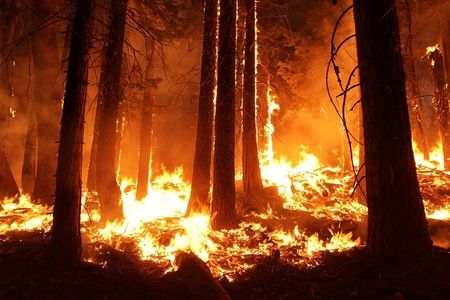 Photo by Rainforest Partnership
While there are certainly natural phenomena that cause wildfires, such as lightning, a NASA study says 84% of wildfires are caused by human carelessness. Other causes like certain weather conditions can cause wildfires.  Dry conditions increase fire risk but windy conditions can also push wildfires forward and spread embers. Hot conditions can make the ground more likely to burn, and on a hot day, rising warm air can create a path for fire to travel up steep landscapes such as mountains.
What is the implication on food security? Well, let’s take a look.

Food security, as defined by the United Nations’ Committee on World Food Security, means that all people, at all times, have physical, social, and economic access to sufficient, safe, and nutritious food that meets their food preferences and dietary needs for an active and healthy life.
The epidemic spread of wildfires in the Amazon rainforest over the years is causing a change in weather patterns. Rainforests add water to the atmosphere when plants release water from their leaves during photosynthesis. When forests burn, there is less moisture released into the atmosphere, which can mean less rainfall.
The World Meteorological Organization tweeted about the smoke that has spread across Brazil stating, “Fires release pollutants, including particulate matter & toxic gases such as carbon monoxide, nitrogen oxides and non-methane organic compounds into the atmosphere.” These toxic gases inhibit access to sufficient, safe and nutritious food required to live an active and healthy life.
Furthermore, the gradual deforestation of the Amazon Rainforest causes disease outbreaks. Researchers have linked the felling of forests to rises in malaria and dengue fever, for instance. If the forest continues to burn, it will release a vast amount of carbon dioxide pollution into the atmosphere," says Adrian Forsyth, PhD, co-founder of the Amazon Conservation Association and executive director of the Andes Amazon Fund. How then do we expect farmers to increase food productivity when their health is impaired by the Amazon wildfires? Brazil ranks second in the world for soy and beef production. This could result in shortages and increased prices.

At this point, what can we do?

Donate to organizations
One way to help combat the Amazon wildfires is to donate to organisations. Amazon Watch, Rainforest Alliance and World Wildlife Fund are examples of organisations helping to fight against the Amazon wildfires.
Since 1996, Amazon Watch has worked with indigenous communities to protect their rights, as well as the rain forest. Rainforest Alliance is an NGO dedicated to conserving biodiversity and educating consumers about sustainability. While the World Wildlife Fund is another international NGO, that focuses on reducing human impact on the environment to conserve wildlife and protect endangered species.
How can humans contribute to the sustenance of the Amazon Rainforest? Kindly share your thoughts and opinions in the comment section.
References
AJ Willingham, CNN. (2018) 6 important things to know about wildfire. Retrieved from: https://edition.cnn.com/2017/10/11/weather/wildfires-things-to-know-trnd/index.html
Amanda Arnold. (2019). How to Help Fight the Amazon Rain Forest Fires. Retrieved from: https://www.thecut.com/2019/08/how-to-help-the-amazon-rainforest-fires-in-5-ways.html
Daniel Nepstad. (2019). The myths and the truth about the fires in the Amazon Opinion. Retrieved from https://edition.cnn.com/2019/09/05/opinions/amazon-fires-myths-and-truth-opinion-nepstad/index.html
Eric Levenson. (2017) Study: Vast majority of wildfires started by humans. Retrieved from: https://edition.cnn.com/2017/03/07/us/nasa-study-wildfires-human/index.html
Kathleen Doheny (2019). Amazon Rainforest Fires: Effects on Health, Weather. Retrieved from https://www.webmd.com/a-to-z-guides/news/20190828/amazon-rainforest-fires-effects-on-health-weather
Scott Denning. (2019). There's One Wrong Statistic Everyone's Sharing About The Devastating Amazon Fires. Retrieved from: https://www.sciencealert.com/there-s-one-wrong-statistic-everyone-s-sharing-about-the-devastating-amazon-fires
Cover image from Rainforest Partnership